The Trip To Badagry 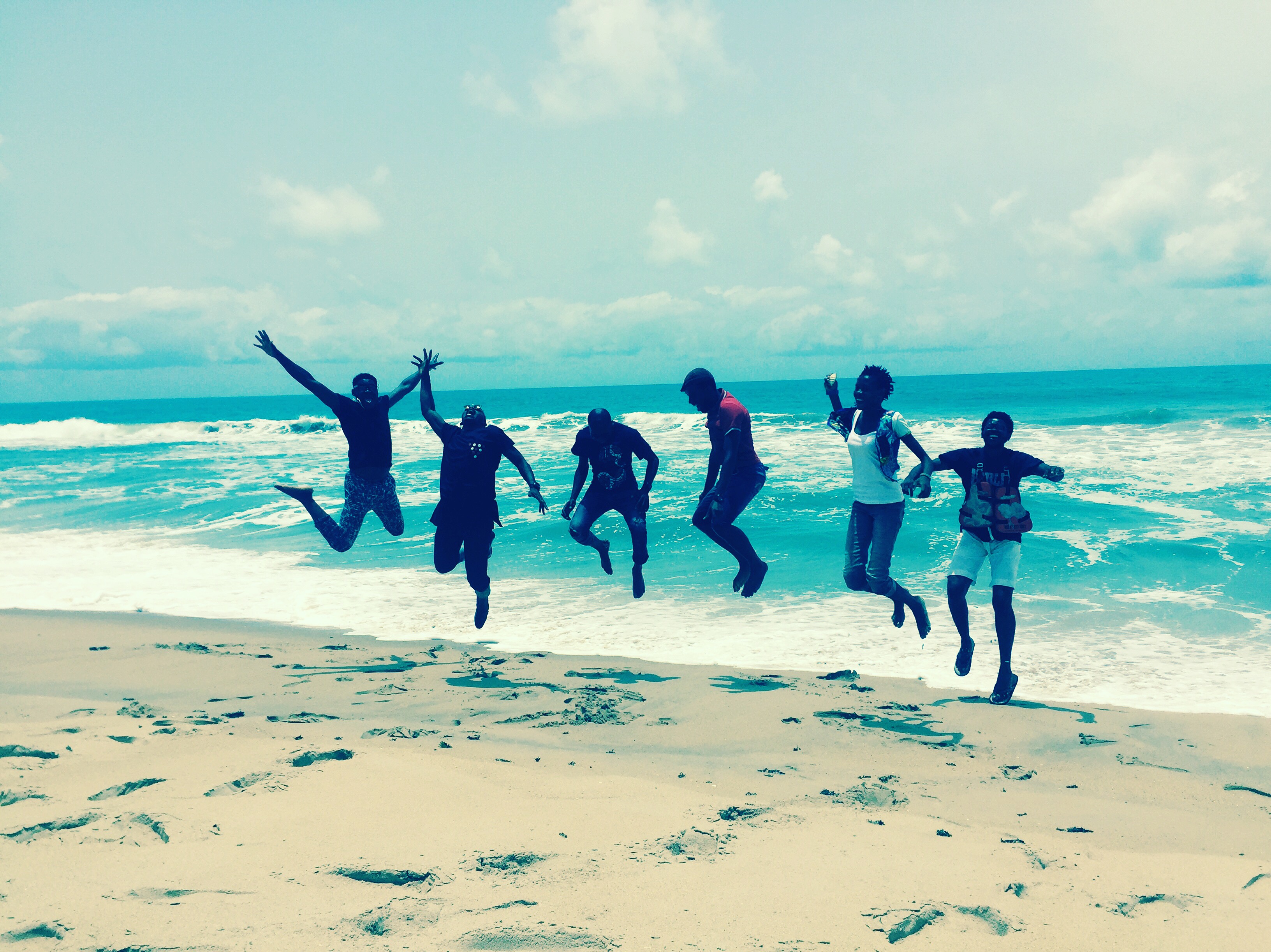 Allahu Akbar! God is great! Those were the words of my mouth and I am not even a Muslim.

Still trying to spit out the salty water in my mouth, the tides of water came on my foot with crabs running helter skelter.
I was truly in a wonder world, everything just seems perfect, the word trouble has been just a mere word here.
A few souls, palm fronds, coconut trees, desolated fishing boats, the turquoise water waves receding fast down the shore and crashing back with foamy tops; Mother Nature is truly beautiful! 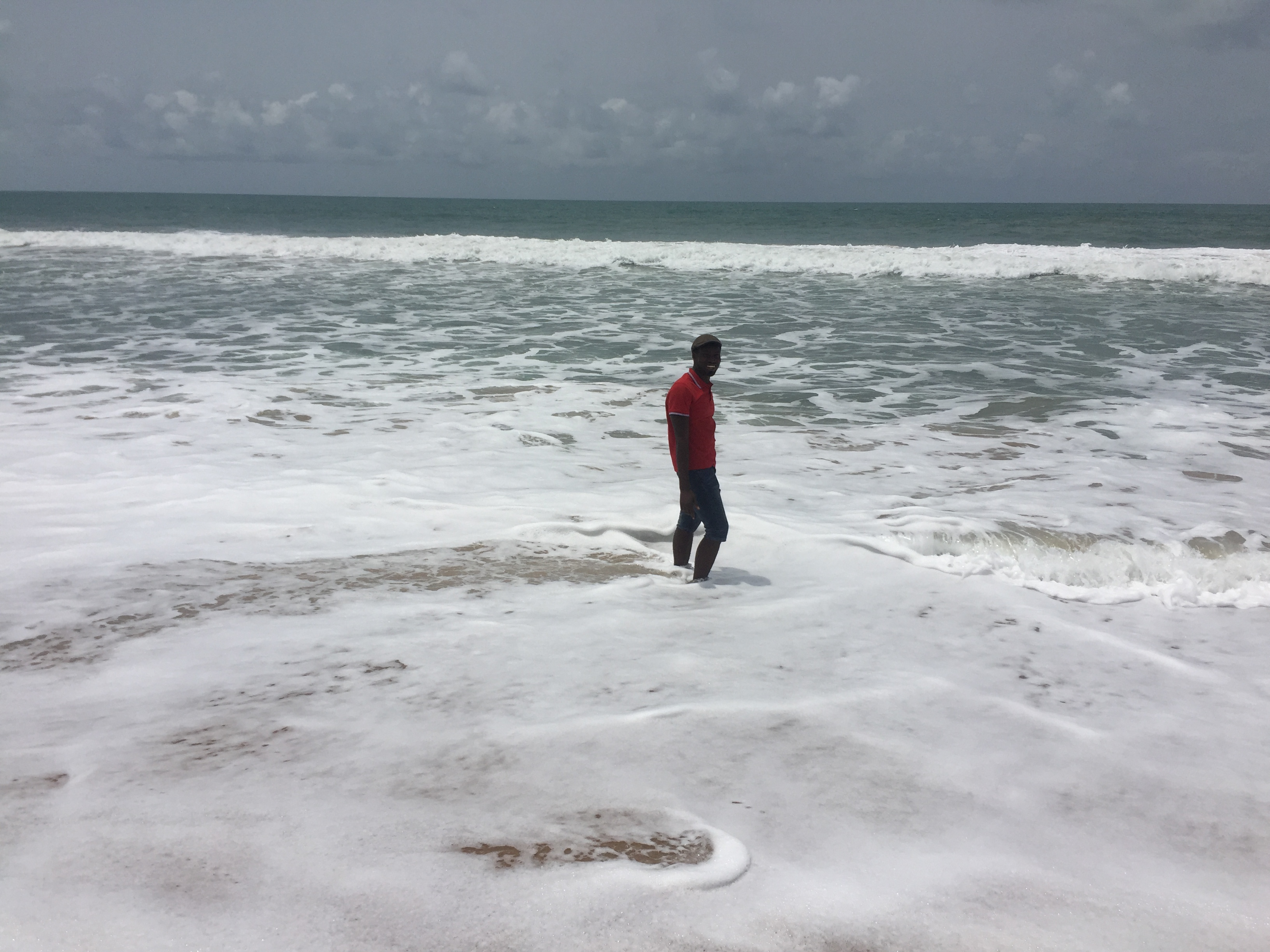 So I am in Badagry beach and it’s just six of us walking and making memories with our foot path , the crabs are hospitable they welcomed us and continue their fun with the water.
It’s my first time on an island(wait oh but Victoria Island is an Island right?). This island is a lonely one, my depressing thoughts about slavery collapsed with the waves I was staring at, I stopped imagining how many slaves died traveling through this huge body of waters, I place one foot in the wave and the other on the sand. My thoughts are still divided.

Our day at Badagry began on a moody note, first stop was the first storey building in Nigeria built in 1845.

It was made of hard fired clay bricks and very thick and heavy zinc roofs (trust me they are not the kind of ones we have today, I strained my hands lifting them)
up), then we saw the Ajayi Crowther’s first Yoruba translation of the bible, after which we moved to the Seriki Abass heritage museum (which is a family house where people live) and then Brazilian  Barracoon where the slaves were kept.
On the wall inside one of the rooms was written- 100 slaves for one cannon, the same canon I sat on. The rooms were really small, and 40 slaves were cramped here for three months or more till a ship comes from Europe.
I took off from the wall a real wrought iron neck shackle and wore it on my neck, and each of us tried it, it was depressing but that’s our history.
Slavery was a terrible experience, the chain itself weighed about 3kg, walking alone in those chains was torture. Our forefathers were truly greedy, a bottle of alcohol, mirrors and umbrellas were exchanged for their fellow brethren.Bring 30 slaves get 2 bottles of Scottish brandy, that was the “mmm” scheme then.
But God is truly creative! The crabs march the color of the sand perfectly, the palm trees complimented the blue sky(I always say palm trees and sky and like yam and palm oil), the beach lightened up our mood, I now assumed my usual role-The Phone Photographer

Our next point was where Christianity was first preached in Nigeria under the Agia tree, what remained now was just a monument and a cenotaph.
Oh point of no return! As we waited for the canoe man to get fuel, my mind was still wondering around the coast of Badagry , Badagry is like that quiet child that loves being a loner, he keeps to himself and lives in his own world. Badagry had this quiet “edakun-don’t-disturb-me” kind of ambiance.
As a coastal island , Badagry is sandwiched between the gulf of Guinea and that of Atlantic ocean.

We wore our life jacket and down into the canoe, our adventurous driver still came with us and wanted to go so we allowed him. Adventure is for all ain’t it?
On our way to the point of no return, our tour guide brought us to a well, it is a voodoo well made for slaves to forget who they are and where they’re from. Well, there could be science to this voodoo as this water from description fits a sedative drug. After drinking, the water made the slaves very weak, low reflexes and dull making many of them sleep throughout the journey(this was the remedy stopping any form of rebellious moves, because they were stories of slaves ganging up and throwing their slave masters down the waters).
Returning back from the point of no return our final destination was whispering palms, a private resort.
Our tour guide and I already were bragging about our table tennis skills and we decided to settle this score right at whispering palms, we paid 500 per head and here we are at whispering palms.
So like we always know(ok most ladies don’t) that it’s either  Madrid and Barca that would top la Liga but just for the fun of it, they still call it a league and play with other clubs, we started by playing “rote” or “first seven” as some call it, and as expected me and the tour guide met twice at the final

Both games were tough, but a boss is a boss!(hater insert hate speech here)
Nothing really special about the whispering palms, the palms weren’t even whispering.
So it’s 5’o clock and we are back in our bus and ready to meet the chaotic city of Lagos.
Will I visit Badagry again? Yes! And this time it will be a weekend sleepover and camping with a lover, nothing will be more romantic like kissing under the tides of water, the night stars shining bright above you until your lover turns into Iyemoja and drag your ass into the sea.

If properly maintained would be a very nice surfing resort( who said Africans can’t surf?) and by the way if you need a good tour guide, contact this number 08066269941

-Brazilian barracoon, the word Baracoon means enclosure in which black slaves were confined for a limited period (Olodo I bet you didn’t know this either).
-Seriki Abass,famous slave trader had 128 wives 144 children( more like a modern time Solomon)
-There is a 200 years old regalia of his still inside his museum.
-Point of no return is a 20minute walk from the harbour so brace your self and get ready.
-The people of Badagry are welcoming.

A VIDEO SUMMARY OF OUR TRIP