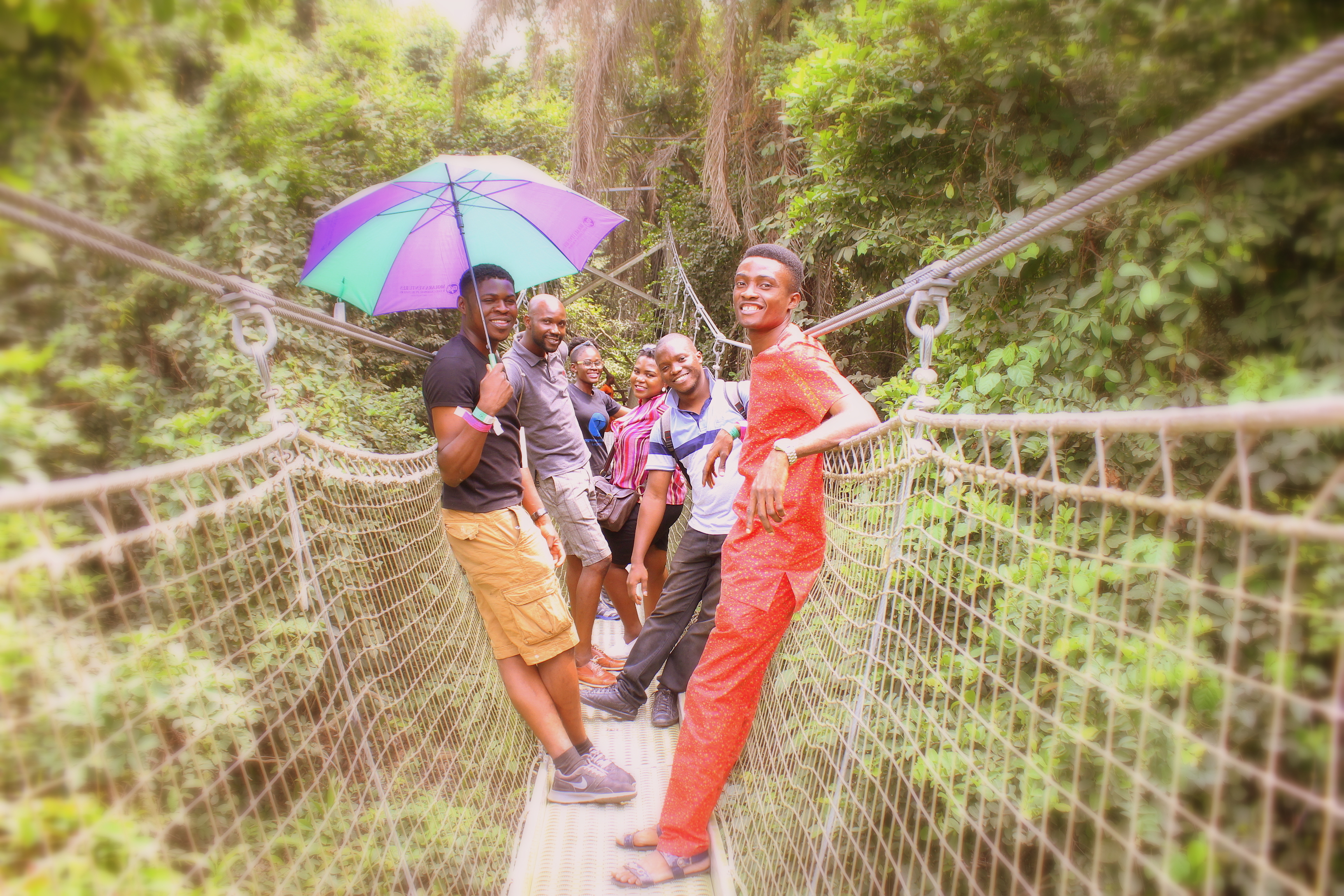 The first time I heard CANOPY WALK  that was 5 years ago. Having been to lots of weddings and devoured too many party Jollof,  the first thing that came to my mind were those huge canopies with bold write ups-KAYODE RENTALS, IYADUNNI CATERING & RENTALS  and the rest of the other rentals.

In 2010 my European friend was telling me about a new canopy walk being built in Lagos, and I nodded in unison like I  had an idea of what crap he was talking about.

So canopy walk? Who walks on a canopy sef?

Fast forward to 2016, I am in Ilorin- Yes Ilorin!, I now know what canopy walk is or looks like (thanks to google), so I wanted to see what this city could offer, and the first #hashtag of what might be a place of interest in Ilorin was a canopy walk at UNILORIN zoo.

Ooshey! Canopy walk in Ilorin? Ilorin want to prove it’s not a boring city ‘fa’? The Ajala in me leaped for joy, oya lets explore!

So we formed a group, set a date and found ourselves at the zoo, we moved around the animals in the zoo first then later to the walk, it was 200 Naira .

Everything started on a shaky note, and as a bahdt guy that I  am, I was in front walking on it like a boss, below animals were moving around to the rhythm of Wehdonsir, while some panicked while walking on it, I was forming Chuck Norris of height. Imagine even a guy too was shaking as he walked on it( he is probably reading this).

With time some got used to it and conquered that thing…..that phobia…… what is it called again sef, oh yeah- ACROPHOBIA.

My only dread was the rope cutting in between, the lions in the zoo out on the loose and each of us falling off into the Lions mouth like we were the ones against Daniel in the Bible…..So after the trip, I wanted to go for more canopy walks and yippee! google helped and Voila! -The Lekki conservation center home to the longest canopy walk in Africa at 400m long and 22 m tall came in , I must climb o.

To cut my cock and malu story short, I joined a Lagos group going for a trip and phiam! I was in lagos.

You Know Lagos and plenty efizzy, first the price tag was 1k for the garden and 1k  for the walk, well issokay I sha must climb this thing.

We paid and the adrenalin rush began, the feeling was just epic compared to that of Ilorin, it was like a Naira millionaire in this present exchange rate who thinks he was rich until he traveled abroad and saw his millions were just a few wads of dollars.

But chai Lagos is truly the center of excellence, the Lekki canopy walk dwarfed that of Ilorin, it was well arranged in between denser trees and it had 5 stages. It was like one of those scenes from the movie-Tarzan, I was walking on top of a forest world. As usual, I fantasized again, this time it was the scene in Jurassic Park that came into my head, so what if dinosaurs just come out of this place and start chasing us, who will they eat first, and where will I run to on this thing?….. If I remember correctly it’s not a canopy run.

As usual I fantasized again, this time it was the scene in Jurassic Park that came into my head, Edakun so if dinosaurs just come out of this place and start chasing us, who will they eat first, and where will I run to on this thing?….. If I remember correctly it’s not a canopy run. From nowhere this chinko looking monkey jumped out (yeah call me racist) and scared the crap out of me.

Why now monkey, I don’t have any banana for you.

After the long walk to freedom, we ate, gist and had a little picnic.

After all has been said and done (and also written) Ilorin canopy walk and that of Lekki in three words- Naira meets Dollar.

-The longest canopy walkway in the world at the Taman Negara National Park, Malaysia.-500m long.

1-The Lekki Conservation Centre   Canopy Walk in Lagos is the first-longest in Africa – 400 m long.

2-The Kakum National Park Canopy Walk in Central Ghana is the second-longest in Africa – 350m long.